I PLANTED MY GARDEN TODAY!

Okay, those of you with big gardens may chuckle, and those who think they don't have room for a garden may take heart.

I took one more step toward self-sufficiency today and planted my garden. Two tomato plants went into bigger pots (the beige ones), as did some mint (in the blue pot toward the back). And I bought marigolds as companion plants (smaller dark blue pots) to keep some of the insect pests away.

Guess I have more city ways to unlearn than I thought, since I want instant gratification and not wait for seeds to sprout. Though I did plant beans and mixed gourds (including miniature pumpkins) that will climb up my grandson's twig teepee behind the pots. And this in addition to the blueberry, blackberry and raspberry plants I bought a couple weeks ago.

Granted, not a huge gardening enterprise, but it puts me in gardening mode and the pots can go with the doggies and me when we move to our farm.

Yet to plant: lettuce, short carrots and oregano--all in pots so those can also move with us. Loving dirt therapy!
Posted by Genene Valleau, writing as Genie Gabriel at 7:10 PM No comments:

CLEANING UP TO MOVE OUT 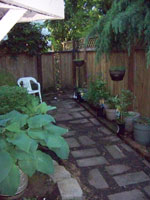 One of my tasks to complete before the doggies and I move is to clean up my city house and yard. A task that has been neglected for the past few years as I wrote my series of books. I've skimmed along the surface of cleaning and maintenance--at least enough to stay under the radar of the Health Department. :)

Now, I'm serious about spiffing things up. I'm doing this in layers, similar to the process I use to write books.
--A sweep through to decide what to do with each area/room (like to planning/plotting a book).
--Taking care of major tasks, such as reclaiming the walkways and getting rid of large areas of overgrown weeds--similar to completing the scene sheets I do for a book to lay out the main points of the story.
--The next step will be going back over the yard and house to pull out weeds that have grown back or were missed in the first sweep, edging the grassy areas, etc. The final edits to a story, so to speak, where I make sure everything flows smoothly.

I'm in the "major tasks" stage of the house and yard. The front and narrow side yards are looking pretty good, and I've started on the back yard--which seems to get away from me by early summer each year. I'm taking a more casual approach this year. In the areas where grass wants to grow, I'm letting it take over and just plan to mow it instead of struggling to get all the grass and roots out. In places where vigorous flowering plants take over, I'm going to enjoy their blooms, then mow when the blooms fade. (Yes, I purchased a new mower last year and am going to make use of it. :)

To keep myself from becoming overwhelmed, I've been walking through the areas that look pretty good and enjoying the "ahh…" feeling of happy plants growing in beds that have just been watered by the hoses and sprinklers I set up a week or so ago. Definitely an "ahh…"

The photo is one of the side yards where I've reclaimed the pathway and put all the plants in pots to move with us when we get our country property. Ah, progress!
Posted by Genene Valleau, writing as Genie Gabriel at 2:15 PM No comments: 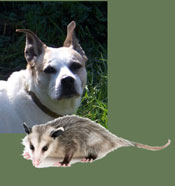 A few days ago, my dogs discovered a possum under my deck.

"Leave it" means nothing to a terrier on the scent of a critter, and the rest of my doggie herd soon decided since I was digging in my yard, they could dig up the deck.

I put the dogs in the house and set about "rescuing" the possum, which was about the size of a large cat.

My deck sits up about eighteen inches from the ground. On one side the 2x2s of the railing go down to meet the bricks. The 2x2s are close enough together so the dogs can't wiggle under the deck. But I thought if I moved the bricks, the possum could back out.

Those who know possums are probably rolling on the floor laughing by this time. As I told this tale to my neighbor, he said if a possum can get its head through, the rest of the body will follow. Wish I had talked to him before I performed the remainder of my "rescue."

Well, the possum didn't want to back out from under the deck. And I decided the concrete blocks that held up the deck were too close together for her to escape.

So I tried a different approach. In front of the deck, I had built up a step by boxing in layers of gravel, sand and paving stones laid on top. Off came the paving stones and I dug away some of the sand.

Then I saw the little possum "hand." Too weirdly human--like a tiny little old woman with perfectly formed fingers and fingernails. She put her hand out as if asking for help.

By this time, I had discovered a 2x4 laid down to help box in my step. So I didn't have to dig out the entire eight-foot long step, I decided to cut the 2x4. I went to fetch a saw and, when I came back, a baby possum had crawled out to look around, looking at me as if saying, "Whatcha doin'?"

Great! A mother possum and her babies. I'm obviously a softie and don't like to kill anything. But babies? This made the rescue more imperative!

I had already inserted a piece of plastic gutter guard down between the deck top boards so the possum didn't run to a different part of the deck and get stuck somewhere else. So I figured this would also keep the possum away from the saw blade.

I warned them this would be noisy, but I don't think they grasped the reality of the noise and vibration a sawz-all makes. As soon as I turned on the saw, the possum family scrambled away, with momma chirping like crazy to round up her babies.

Not stuck at all. Just had a nice cool place to hang out during the hot part of the day.

So you can see why I wished I had talked to my neighbor first. Wouldn't have resolved my need to rehome the possums under my deck, but might have changed my strategy.

The story might have ended there, but the possums didn't move out and my dogs didn't appreciate the squatters in their territory.

This morning, we had round two of dogs vs. possums. Only this time, my mighty hunting terrier started digging up my flower bed in his enthusiasm to reach the possum from a different part of the deck. Yes, these are flower beds that "were" looking quite nice because it's spring and the iris are just about to open up.

Using a different strategy to encourage our possums to move out and discourage my doggies from digging, I banged the broom along the deck boards.

A bit later, I heard Momma Possum chirping again from a distance away, so hoped they were packing their bags.

Sadly, not fast enough. When I went out a short time later to see what the dogs were barking about, I found the baby possum, who had been hurt.

The dogs were put back in the house and I scooped up the little one in a towel. Reiki immediately started flowing from my hands, and I wasn't sure if the little one would survive or not. I sat holding him for awhile and he told me he wanted to be with his momma.

So I finally carried him over to an opening under the fence that goes to an overgrown part of a different neighbor's yard where I had heard the possums chirping the last few days. Guess I should clarify I still live in a city of over a hundred thousand people. This is not a wooded area, but the critters have carved out homes wherever they can find them.

I checked on the little one a bit later and he wasn't where I had set him. I want to believe he and his momma were reunited. And fingers crossed the possum family finds a cool spot other than under my deck to spend the hot days.
Posted by Genene Valleau, writing as Genie Gabriel at 2:26 PM 2 comments: