SOME OF THE BEST DOGS COME FROM THE SHELTER

In honor of Adopt-a-Shelter-Dog Month during October, I am sharing a few of my shelter dog stories. 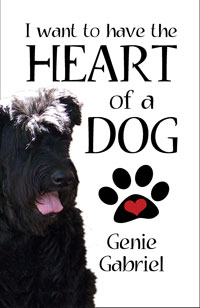 Excerpts from I Want to Have the Heart of a Dog
by Genie Gabriel (www.GenieGabriel.com)
BUY now!
(Digital or print) 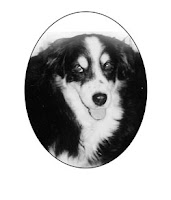 ACE
Ace was my first shelter dog. A Border Collie mix with golden eyes that mesmerized me, and I knew instantly he was smarter than most people. He convinced me some of the best dogs come from the shelter. I got that lesson instantly–most dogs are in shelters or on the streets because of human actions, not their own. The so-called issues that landed my adopted dogs in the shelter have not been problems for me.

For instance, one of the conditions of adopting Ace was he be neutered within seventy-two hours or we would forfeit the extra deposit we made when we adopted him. Seems he had a price on his head at the dog control office because he had run away several times from his previous owners. We didn’t have any problems with him running. In fact, one day he broke the glass in our old, single-paned front door when the mailman came. The neighbors called me at work and I hurried home. Ace was laying on the front porch and greeted me with a grin and the question, “When’s dinner?”

SOPHIE
The first time I saw her, she was laying in deathly stillness in one of the stray kennels. A big, black dog and I was in love again…Though I didn’t know it at the time…she was mourning as well as having a massive bladder-and-more infection. When I heard her story and learned she was considered unadoptable because she was twelve years old and incontinent, I stated, “Well, I’ll adopt her.” …Staff cautioned me this would probably be for hospice…The first evening, she proudly TROTTED down the sidewalk. This “hospice” dog and I had three years together. RASCAL
[Rascal] had three paws in the euthanasia room when I asked the kennel manager to give me a few days with him…Though he got along well with my other dogs, he was terrified of most everything, and it was obvious he had been abused…My beautiful Stewart was Rascal’s therapist. Whenever Raz panicked and started biting at everything, Stewart stood over him and put him in a gentle headlock until Raz realized he was safe and no one was hurting him. When Raz calmed down, Stewart released him…[Rascal] has been with me and my herd for many years now, and he still sleeps on my pillow.

Posted by Genene Valleau, writing as Genie Gabriel at 7:34 PM