ANIMALS PROTECT EACH OTHER TOO! 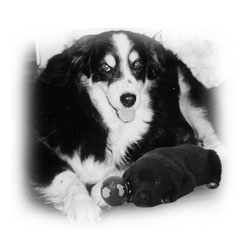 However, one day my younger son called me at work and said Ace had chased a man away from our house and a block and a half down the road.

My Ace was normally not aggressive. As we pieced together what happened, this guy apparently was in our side yard–where he had no business being. And puppy Goliath was sitting at the side door. We figured he was trying to steal the puppy and Ace showed him how inappropriate that was–breaking through the gate to prove his point.

After Ace dispatched the trespasser and would-be dognapper, he came back to the house. This incident strengthened another perception: not only is the connection between dogs and their humans special, so is the bond between animals.

Posted by Genene Valleau, writing as Genie Gabriel at 12:15 AM