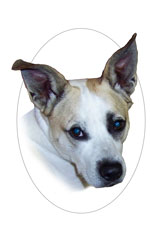 Batman came to the shelter with a leg that had been broken for some time. Since a piece at the top of the femur had been completely broken away from the rest of the leg bone, a local veterinarian removed the bone chip and fitted the leg back into the joint by a genius refashioning of the cartilage.

Batman sped through recovery. The biggest challenge was to remind him to use all four legs instead of running and jumping on three as he had become accustomed to doing while his leg was injured.

Five weeks into recovery, the vet who performed the surgery said she usually didn’t see such healing until five or six MONTHS. Reiki energy healing and determination, with a good dose of play mixed in, can bring miracles!

Over the next weeks, Batman cooperated fully in rebuilding the muscles in his leg by running, jumping and climbing as any youthful terrier would do. A nervous habit of chewing pillows, coats, shoes and whatever else got close to his mouth was soothed by a steady supply of toys, chews and Kongs stuffed with goodies. He later learned to calm himself by getting a bone to chew on.

When the time came to return Batman to the shelter, things didn’t work out as well as with my first foster dog. The Batz did not like being confined to a kennel and quite vocally made his displeasure known. I waffled for awhile about whether to adopt him or not, and finally caved to what we both wanted.

However, my future as a doggie foster parent took a definite downward turn that day. A failed foster, my co-workers teased me, as they chalked up another adoption.
Posted by Genene Valleau, writing as Genie Gabriel at 12:01 AM