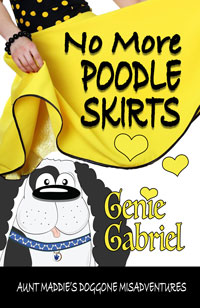 DIGITAL VERSION AVAILABLE NOW
FOR ONLY 99 CENTS!
My Cocker Spaniel, Rascal, had three paws in the euthanasia room when I took him home "for a few days." He had three failed adoptions and a reputation for biting at everything and everybody. But Raz and I had bonded nose-to-nose when I picked him up from his neuter appointment. I was a shelter employee at that time and had seen how cheerful he could be at the shelter. I had to give him another chance.

However, it wasn't me but another of my dogs, Stewart, who became Rascal's therapist. It didn't take long to realize Rascal's vision was not normal. You know how some people have a vision problem that makes everything wavy like a funhouse mirror? That's what was going on with Raz. Of course anyone who came toward him looked distorted and scary, so he would panic and start biting round and round. When this happened, Stewart would stand over Rascal and gently put him in a headlock with his paws crossed over Rascal's chest. In a few minutes, Rascal would realize no one was hurting him and he was safe. When he stopped biting, Stewart would release him. Amazing to watch!

That's been about ten years ago, and Rascal still sleeps on my pillow, like he's done since the first night he came to my house. And this beautiful boy with the wavy vision became the inspiration for the dog in my novella, No More Poodle Skirts. I'm sure Raz would appreciate an inventor like Uncle Horace, who could make him a pair of eye goggles that gave him perfect vision!

DIGITAL VERSION AVAILABLE NOW
FOR ONLY 99 CENTS!
Posted by Genene Valleau, writing as Genie Gabriel at 12:01 AM