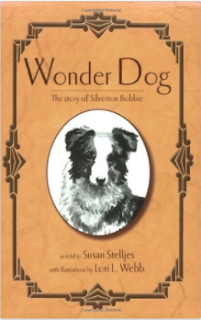 Other Collies besides Lassie have also enjoyed fame.

One of those is Bobbie, the Wonder Dog. In 1923, he was separated from his owners on a road trip and lost in Indiana. After an exhaustive search, the broken-hearted family returned to their home in Oregon never expecting to see their beloved dog again. Six months later, Bobbie appeared on their doorstep mangy and scrawny with feet worn to the bone; he showed all the signs of having walked the entire way back—over 2500 miles. He was the subject of newspapers articles; played himself in a 1924 silent film, The Call of the West; and received hundreds of letters. You can find out more about Bobbie at <http://silvertonbobbie.com/Home.html>.

Other famous Collies:
— Former President Lyndon Johnson had a pet collie.
— Reveille, a Rough Collie, was official mascot of Texas A&M University. There have been a number of “Reveilles” since the first mascot in 1931.
— Lad, pet of author Albert Payson Terhune, is chronicled through several short stories, most famously in the collection Lad, A Dog.
Posted by Genene Valleau, writing as Genie Gabriel at 12:01 AM