DOGS FIND THEIR OWN ROLES 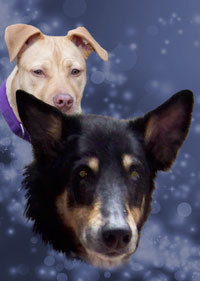 The interaction between The Big Three—Ace, Goliath and Duncan—was interesting. Duncan made a few attempts to dethrone Ace as the alpha dog. Ace was a senior dog by that time. No more jumping into the car through the windows or crashing through fences. However, Goliath did not tolerate Duncan’s attempts to take over as top dog. He made it clear Ace would be the boss as long as he was alive.

After Ace became an angel, Goliath the Adored One became the reluctant alpha dog, and I realized he had shown his respect for Ace in another way. When Ace was alive, Goliath never lifted his leg to mark his territory. After Ace transitioned, Goliath started lifting his leg to mark. Another sign animals have more depth than most humans give them credit for.

Since the Alpha Dog role was taken during the time Duncan was with us, he found a different role: that of nurturing disciplinarian.

NOT IN THE HOUSE!
In addition to his determination to teach Brooklyn appropriate behavior (check out the earlier post of “The Cat Who Thought He Was a Dog”), Duncan lent a paw in teaching younger dogs the house rules. When the youngsters came inside, my older dogs continued their lessons, insisting they not play. As a result, they learned to be down and quiet in the house. More effective than a human trying to teach manners!

WARNING IGNORED
As Duncan grew older and illness weakened his body, my foster dog Tuley became his special companion. He growled half-heartedly at her when he climbed onto the bed. She respected the warning–until he fell asleep. Then she snuck up on the bed and cuddled next to him, putting her chin on his back and comforting him.

In a reversal of roles, the nurturer was rewarded for his years of caring for others.
Posted by Genene Valleau, writing as Genie Gabriel at 1:01 AM