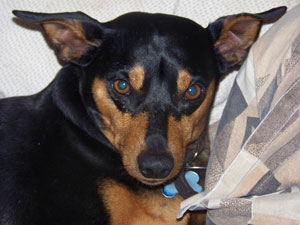 A miniature Pinscher rescued by my son and an ex-girlfriend from an abusive and neglectful neighbor was the next to join my pack. When my son’s relationship broke up with much drama and acrimony, Grimlin stayed with her until she decided he was “out of control” and “wouldn’t mind.”

He’s done just fine with me. Though he stays at my house for now, he knows who his people are–my son and grandson. No one and nothing else exists when my grandson is here–well, except maybe food.

As with every dog, Grimlin has a unique personality. He loves to wrap himself in blankets. Not just burrow under them, mind you, but to actually wrap them around himself like a cocoon.

Grimlin also has perfected a tough guy act for me. When I come home, he waits in another room until I peek around the corner, then he charges at me, barking almost as fiercely as his stubby tail is wagging. When I scratch him and tell him what a ferocious doggie he is, he grins at me and asks for more attention.