SEIZED BY ANOTHER CHALLENGE 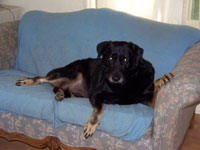 Seizures can be terrifying when they grip a beloved furbaby. My little Lady suffered occasional seizures after she ran into the tire of a car as she was dashing full speed chasing a cat. Although disconcerting, these episodes were mild compared to the grand mal seizures that ravaged my Stewart.

They came on suddenly and frequently when he was about four years old. Sometimes several a day for two or three days in a row. Then they would subside for a week or two, giving us hope; only to return stronger and longer than before.

If your furbaby has seizures, there are support groups of other pet parents online who are living day to day with this situation. This can be helpful or more confusing as there will be a number of differing opinions on how to cope. Also, your veterinarian may not have a lot of experience in treating dogs with this condition, and that may add another layer of stress.

When seizures occur, I take a different approach than may be recommended by others. Yes, this is where I say I'm not a vet and not allowed to make a diagnosis or recommend treatment.

I offer what has been helpful with my own furbabies. Everyone should make their own decisions on how to proceed if they have a pet who has seizures. If we notice a seizure beginning, one of the humans in our family cuddles the dog close. With small dogs, this is fairly easy. With larger animals, the thrashing caused by the seizure can be dangerous to anyone nearby as well as the animal seizing, so clearing the area of anything the animal may crash into and injure themselves is beneficial.

Being an energy healer, the energy begins flowing immediately to help calm everyone. I'm also an animal communicator and know animals feel very disoriented and lost during seizures, so I talk to them continuously, giving them a sound to follow back to "normal," as well as loving arms that help anchor them in the physical world.

I use mostly natural treatments and energy healing for any physical disorders that come up with me or my furbabies. I also do a lot of research on possible treatments. With Stewart's seizures, we chased a cure or at least relief for three years. Prescription medications, Chinese herbs for organ cleanses, supplements for his immune system, acupuncture, energy healing, natural flea remedies, cool temperatures, eliminating certain foods from his diet, eating every four hours.

Perhaps most distressing was the change in his personality, from happy nurturer to an unsure, hesitant dog. He didn’t feel safe around the other dogs because two of them attacked him when he was having a seizure and couldn’t defend himself.

I finally discovered a combination that stopped the seizures: running Reiki directly into the knobby bones behind his ears and wiping cold water on his face.

The cold water was Divine intervention. I was trying to get a good fix on the bony knobs to run Reiki while Stewart was seizing. In the meantime, his legs were paddling, hit the water bowl and drenched us both with cold water. Stopped his seizure instantly. This was also the last one of the cluster of seizures that had been occurring for a couple days.

This set me to thinking. I knew heat was a factor when a seizure was building for him. He paced and panted, his mouth becoming redder, and the inside of his ears ranged from warm to really hot.

When he started showing those signs, I wiped his face and head with cold water, and held a cold cloth inside his ears and wicked away the heat. I also ran Reiki directly into those knobby bones, over his head and wherever else he wanted/needed it, whenever he wanted it.

Near Thanksgiving, Stewart had a cluster of severe seizures and I thought I was going to lose him. He recovered, but kept showing me a blinking red light on the left side of his brain and told me it was an aneurysm.

Although Stewart died suddenly in the midst of a seizure several months later, please know that seizures don't have to be a death sentence. My Lady lived to be 17 years old. I've also been a pet parent to other dogs who have occasional seizures, but who are otherwise happy dogs not on medications.