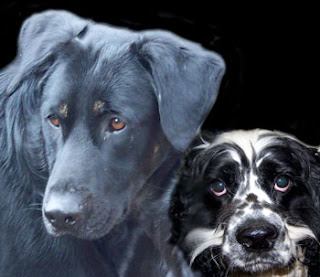 ~ Dog-to-dog therapy ~
One of the dogs who came to live with us had been horribly abused, especially around his head. His eyesight also wasn’t very good. You may have heard of people having wavy vision. That’s what was going on with him, so everything that approached him looked like a monster.

Of course he was terrified, and biting was the only way he knew how to protect himself. He had three paws in the euthanasia room when I asked to bring him home and give him another chance.

My beautiful Stewart became Rascal’s therapist. Whenever Raz panicked and started biting at everything, Stewart stood over him and put him in a gentle headlock until Raz realized he was safe and no one was hurting him. When Raz calmed down, Stewart released him. It was amazing to watch these “therapy sessions!”