I KNOW THERE'S A DOG IN HERE SOMEWHERE!

When I brought my Cocker Spaniel home from the shelter, I knew next to nothing about this breed of dog. Quantum Canines was his last chance or he was going to be euthanized for biting, supposedly at everyone and anything.

Well, I didn't know much of anything about the breed. Nothing new there. I've brought home quite a number of different purebred and mixed breeds. The dogs will teach me what I need to know.

One thing I learned was that Cocker Spaniels have a lot of hair! Similar to sheep's wool, but it keeps growing. We had a couple not very positive experiences with groomers, so I decided to get a pair of clippers and try grooming. 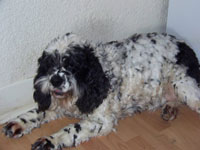 His style may not always be the prettiest, but I get most of the job done and he feels so much better afterward. Here's a photo of him after his latest cut. Yep, more hair on the deck than what's left on the dog. :)

Oh yes, the biting. Raz had been horribly abused, especially around his head. His eyesight also wasn't so good. Have you heard people talk about having wavy vision? That's what was going on with him, so everything that approached him looked like a monster. Of course he was terrified, and biting was the only way he knew how to protect himself.

Raz and I had bonded before two adoptions that didn't work out. I had picked him up from his neuter surgery, and he rode in his kennel in the front seat beside me and pulled lots of Reiki energy. Well, we stopped for a bite to eat and he got out of his kennel and we communicated nose to nose--the way he always has with me. That way he could tell what I actually looked like. Now it's a way to give kisses. :)

Anyway, my beautiful Stewart (who is now an angel) was Razzle's therapist. Whenever Raz panicked and started biting at everything, Stewart would stand over him and put him in a gentle headlock until Raz realized he was safe and no one was hurting him. When Raz calmed down, Stewart released him. It was amazing to watch these "therapy sessions"!

Raz has been with me and my herd for five years now, and Iook forward to many more haircuts with my beautiful boy!
Posted by Genene Valleau, writing as Genie Gabriel at 5:13 PM No comments: