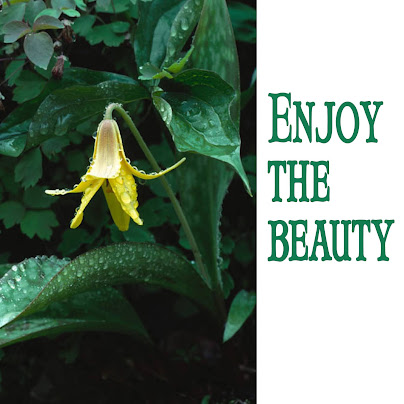 Posted by Genene Valleau, writing as Genie Gabriel at 12:13 AM No comments:

A Month for Moms & Memories 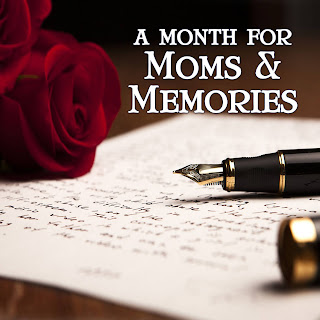 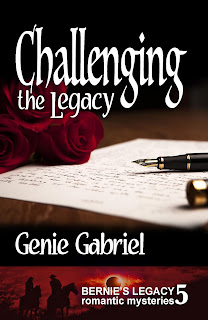 In accepting a most unusual proposal, Tallie O'Shea didn't take the usual route to becoming a mom...

A permanent family. A dad, a mom, and kids. Bernie was the dad and he had the kids. But who would be the mom? Who would marry a hot-tempered cop trying to change his ways and adopt the boys he rescued from squalor?

"Do you want to trade working in a tavern for a house with a white picket fence?”

A flicker of disbelief registered in her eyes.

The woman’s gaze locked with Bernie’s as memories of her own jolted pain through her heart.

Tempting. So tempting. A cop could keep her safe, right? And she wanted kids so badly. Wanted a chance to be a good mom. “Just what would you expect from this arrangement?”

“I want to get married right away so the adoptions of Collin and Patrick can move forward. But I also want a real marriage–sleeping in the same bed, cheering the kids on at soccer games, squabbling over what to watch on television. You decide when you want to be intimate. I won’t push you and I’ll always be faithful to you.”

Bernie paused and grinned. “But I don’t want to still be celibate on our twenty-fifth anniversary.”

Bernie’s grin was Tallie’s undoing. So maybe this man had history, but also a sense of playfulness. That was why she agreed to his proposal.

Or maybe it was because of the chill that crept up her spine when she ran through the darkness to her car and peered through the windows before climbing inside.

(Excerpt from Challenging the Legacy)
BUY digital version now!
Also available in print.
You can read excerpts from all my books
on my web site:
www.GenieGabriel.com
Posted by Genene Valleau, writing as Genie Gabriel at 12:30 AM No comments: 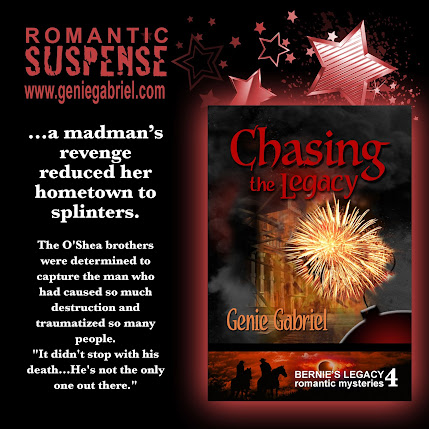 If you haven't seen the first pieces of the puzzle from Bernie's Legacy, my romantic suspense books, you can check them out here (first piece), second piece, third piece, and fourth piece. These puzzle pieces started out on Puzzle Day, January 29, 2021, and reflect my love of puzzles.

The Bernie's Legacy series of ten books solves a piece of the puzzle in each book. However, the question posed in the first book, "Why did you do it?"--and whodunnit--is not resolved until the tenth book in the series.

This piece of the puzzle from CHASING THE LEGACY:  Who caused so much destruction? Who are the others out there?

I hope you have fun "puzzling out" the pieces of this series.

Digital versions of the books

in the Bernie's Legacy series

are on sale for

You can read EXCERPTS

of all my books at:

Posted by Genene Valleau, writing as Genie Gabriel at 5:22 PM No comments:

Travel this weekend to different dimensions!

Want to travel this weekend? Check out the Publisher's Special on Bargain Booksy today <https://www.bargainbooksy.com/read/genre/paranormal/>. Only 99 cents for digital formats of my latest release, SOMETHING BETTER. In moments, you can be traveling through the dimensions to other worlds with beautiful Collie dogs! 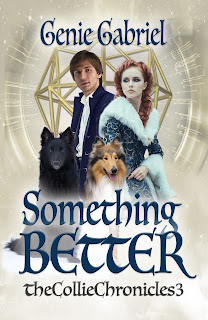 You can read excerpts of all my books
on my web site:
www.GenieGabriel.com
Posted by Genene Valleau, writing as Genie Gabriel at 4:02 PM No comments:

Be Kind to Animals Week 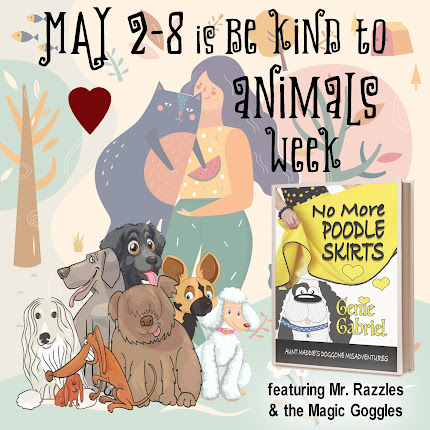 EXCERPT from
NO MORE POODLE SKIRTS

Again the next day, Maddie hoped to see the little dog at the shelter, but he didn’t make an appearance. So while the children and Daphne ate lunch, Maddie set out toward the

“Where are you going, Miz Maddie?” The teenaged boy followed her out of the building.

She considered him for a moment, wondering if he would frighten the little dog farther away. Then decided to give the boy a chance to prove himself. “To look for the little black and white dog.”

A odd look crossed Devon’s face, then he took the lead on the narrow trail into the woods. “I’ve seen him sometimes in a tangle of blackberry bushes about a half mile into these trees.”

They walked in silence for a time.

“What are you going to do if we find him?” The kid asked.

“When we find him, I’m going to convince him he wants to come home with me.”

A short distance later, the kid slowed down. “It’s right up ahead. Maybe you should go first so I don’t scare him.”

Maddie frowned at Devon and he half-shrugged in apology.

“Hey, my doggie friend!” Maddie called. “Will you come out and see me?”

Maddie continued to talk to the dog as she walked slowly around the berry bushes. “I don’t see him.”

“Wait. I think I do.” The kid squatted down. “See? About ten feet into those bushes. There’s something black and white. Come on, little fella, growl at me or something.”

With a slight smile, Devon got down on his hands and knees and crawled slowly toward the black and white object he had seen.

“Can you see if he’s hurt?” Maddie stood on her toes and tried in vain to see the little dog.

“Almost there.” The kid’s voice sounded muffled as he crawled further into the tangle of bushes.

The silence pulsed worry through Maddie’s veins until Devon called out. “He’s alive.”

“Thank goodness! Can you get him out of there?”

“I’ll put him on my jacket and use that as a kind of stretcher to pull him out.”

After what seemed like a dog’s age, Devon emerged backwards, dragging his coat with its precious cargo.

Maddie had to agree. The little dog lay so still, emitting an occasional whimper. Dried blood discolored one of his front legs. “I’m going to take him to the vet.”

Don’t let them put me to sleep!

Maddie touched the little guy’s head. “You tell me what you want when we get there.”

Devon volunteered to go with Maddie and sit in the back seat beside the little dog.

When they arrived at the clinic, the receptionist began asking questions Maddie had no idea to answer. “What’s the dog’s name?”

“Date of birth?” the receptionist asked.

Maddie relayed what Razzles told her, and did the same with the rest of the questions. Until she asked when his last vaccinations were.

“I don’t want you to get sick,” Maddie responded.

“Pardon me?” the receptionist asked.

Maddie faked a smile. “He’s been living on his own and I don’t have much information about him.”

One of the receptionist’s eyebrows lifted. “Do you want to just leave him?”

A horrified look echoed the distress in Maddie’s heart at the thought of abandoning the little dog. “I’ll be paying his expenses, if that’s what you’re asking, and he’ll be coming home with me.”

“Not everyone is as generous and kind as you. Mr. Razzles could have some serious injuries.”

“He’ll be coming home with me,” Maddie repeated.

Posted by Genene Valleau, writing as Genie Gabriel at 4:47 PM No comments: