CARING FOR OLDER DOGS--AN HONOR AND A PRIVILEGE 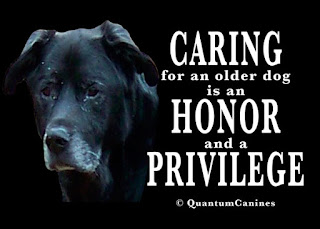 Last spring, two of my dogs seemed to become old overnight, and a third lost his eyesight. Since my dogs usually live to be fifteen to seventeen years old and these dogs were only tennish, I was not emotionally prepared for this to happen.

At this point, I know some people abandon their old dogs out in the country or dump them at an animal shelter. Not even considerations for me.

Other people run to the vet and spend a lot of money pumping their dogs full of prescription drugs. Or pay thousands of dollars for surgeries that might buy a few more months, but could go awry and end the life of a furbaby on the operating table.

I've been down this road a number of times. I've lost track of the hundreds, perhaps thousands, of dollars I spent on medications that may or may not have helped my aging canines. I also invested in surgeries for a couple older dogs. One surgery bought me two more years with my beloved fifteen-year-old Border Collie. Another surgery for The Adored One (a Lab/Rottweiler mix) when he was ten gave us five more years.

Did I do this because I wanted other people to know I was doing everything I could to keep my dogs alive as long as possible? Or because it was truly what I thought was best for my canine companions? Considering the emotional place I was at the time, probably a mix of both.

Then I discovered energy healing, starting with Reiki, and wanted to use all natural remedies. My doggies and I experienced some miracles doing this. Until we once more reached the aging dog stage, and I could see their physical bodies were uncomfortable.

At that point, I started blending energy work, natural remedies and, sparingly, medications from the vet in a crisis.

Over my decades-long journey with dogs, I came to realize caring for older dogs is an honor and a privilege. Much of this realization has come directly from my beloved furbabies since I have gained the gift of communicating with animals.

When I was growing up, seeing our family dogs through their transition was part of my dad's role. When transition time came for the first dog of my adult life, I didn't think I had the strength to watch the euthanasia process that would end the continuous cycle of seizures that had claimed her. For a long, long time I carried shame, guilt and regret for abandoning her with strangers at the end of her life. From that time, I vowed I would always be with my beloved furbabies until their last breath.

My dogs have also given me the knowledge that each transition is as unique and personal as the relationship between dog and human.

Goliath insisted I needed to go through the process of dying with him. And so I did, warning him I wouldn't let him suffer. In his last few days, I cared for his physical body. I gently turned him from one side to another so he didn't develop sores from lying in one position for too long. I swiped fresh water into his mouth and cleaned the urine out of his fur. I woke up at 2:00 a.m. the day after Thanksgiving and knew his physical body had drawn its last breath. I cried and hugged that body, but I also knew his spirit wasn’t there. His spirit was still with me, but closer than ever, bringing me an overwhelming sense of peace that we had experienced wonderful things and learned together and loved. Yes, especially we had loved.

On the other hand, my Sophie tried to make me promise to help her cross the Rainbow Bridge. Bred as a war dog, this Giant Schnauzer knew the survival instincts in her physical body would keep hanging on. In her last months, she developed a tumor at the base of her tail that wouldn't heal. Sophie started telling me her transition time was near, but we had already pulled off a miracle or two, and I wanted another one. Her physical body became sadly emaciated, no matter how much I tried to feed her and what goodies I tempted her with. Finally, she refused to leave the vet's office, insisting it was time to go Home. I reluctantly agreed, as she knew I would, and she was gone in an instant.

The transition of my other beloved furbabies has also been as unique and special as my relationship with each of them.

The one thing in common is caring for an older dog truly is an honor and privilege. It tests your patience, your courage, and your ability to go without sleep, as well as disrupts any routine you ever thought of having.

And lest you start developing an egotistical self-righteousness of what a wonderful, self-sacrificing person you are to help this doggie live a few more days or weeks or months, their physical body dies in spite of all you have done.

As you stumble around in grief with your heart shredded, you may also realize you have been through one of the most incredible spiritual experiences of your life. This cycle of life and death, which can seem fragile and far too short, is not only about our physical bodies and the time we share here on Earth.

The real story is about a spiritual connection that cannot be broken by "something as simple as death," in the words of my beloved Stewart. He should know. Less than a year and a half after his sudden death in the midst of a seizure, he rejoined me and our canine herd in a different, healthy doggie body full of enthusiasm and playfulness.

Looking back over my decades of living with canine companions, I know it's not only an honor and privilege to care for an older dog, but a dog of any age! 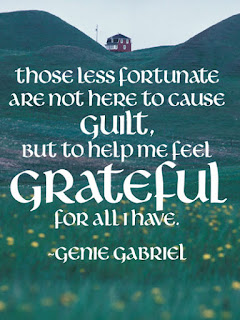 A recent revelation totally shifted the way I look at and feel about wealth and abundance. In the past, I've not been wealthy. I was raised with the belief if I worked hard enough, I would have enough to get by. There were times my kids and I ate pancakes and fruit for a week until payday, but the bills had been paid and we didn't go hungry.

Over the years, I grew stronger and stronger in the knowledge I could do most things myself. At times, I needed to borrow money from my parents or ask for more jars of fruit my mother had canned, but I always had at least one job and we got by okay.

Over the decades when my kids grew up and left home, I earned more money through promotions and changing careers. I was quite proud of doing it myself. At times, I dragged myself out of bed when I felt horrible and went to work anyway. I paid my bills first. I made sure my kids were fed and clean--sometimes in spite of their protests of not needing a shower. I rarely went out and was quite frugal with my money.

A long time passed before I became aware of a dark side of this pride: resenting others who didn't meet my standards of hard work and independence.

Even more insulting was the growing number of government and nonprofit agencies that catered to meeting every need of "those less fortunate." I have paid taxes throughout my entire life to support these programs, but was now approached by people on the streets as well as requests through email and snail mail for more and more money for these causes.

My resentment built with each request but, ironically, so did my guilt for not giving to every cause. By this time, I'd studied enough spiritual laws and done enough energy work to know giving with anything less than pure love was not generating good juju for anyone. In addition, my desire to be a "good and compassionate" person who helped others clashed with the realization if I gave away all my money, I would be the one begging and not be able to help anyone.

Fortunately, I evolved to the point where I asked my spirit guides to help with this dilemma. Their words of wisdom resulted in a major shift in my perception. "Those less fortunate are not here to cause you GUILT, but to help you feel GRATEFUL for all you already have."

As many times happens, these words gave me that third option I have come to look for. Not someone wins and someone loses, but everybody wins.

My next step was to put this into action. Our culture seems to have devolved into throwing money at every issue. I don't think that's always the best solution. Giving a drug addict money doesn't necessarily help. However, shopping with a mom to help feed her kids satisfies their physical hunger as well as offers the opportunity to share kind words and encouragement. Sometimes I just smile or meet the eyes of someone panhandling for money on the street. Many times they seem surprised at that simple acknowledgement we are fellow human beings.

For me personally, I can also offer one of my most treasured gifts: Reiki. Reiki is an ancient process for channeling our life force energy to help heal on the physical, spiritual and emotional levels. I've seen and been part of many miracles using the pure loving energy of Reiki. If a person chooses to accept this gift, amazing things can come about. In addition, it benefits both the giver and the person receiving. Definitely a win-win situation!

By replacing the downward spiral of feeling guilty when others had so little with an option of how everyone can win, I also opened myself to receiving even more abundance. In turn, I can share that abundance with others, which will multiply and come back to me, so I can share even more with others over and over--part of a beautifully expanding cycle of positive energy.

Thank you, spirit guides and Universe, for this empowering and uplifting lesson--something else to be grateful for!
Posted by Genene Valleau, writing as Genie Gabriel at 4:11 PM No comments: