Sun Glasses Day...
a fun day to feature
the books in my
ROCK'n'ROMANCE trilogy 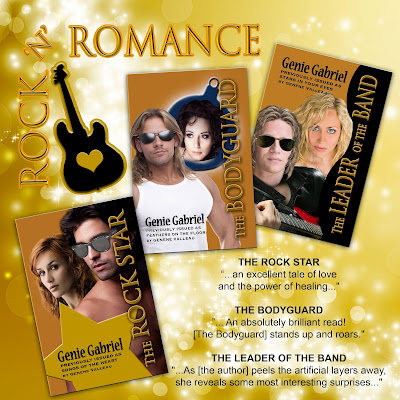 Why do people wear sunglasses? Lots of reasons, including:
From Holiday Insights web site

for excerpts, visit
www.GenieGabriel.com
Posted by Genene Valleau, writing as Genie Gabriel at 1:29 AM No comments:

solstice[ sol-stis, sohl- ]
1- Astronomy. Summer solstice:
this year on June 20, 2020
when the sun reaches its northernmost point
on the celestial sphere... 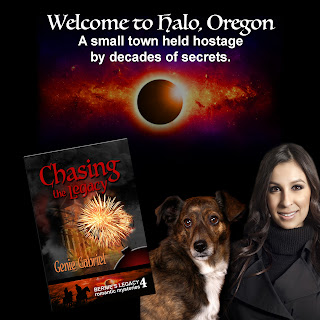 Excerpt from Chasing the Legacy

Layla tossed the stick across the green expanse of lawn beside Waring House. The raggedy but clean brown dog dashed after it, brought it back and dropped it at Layla's feet. Then sat and cocked her head expectantly. With a soft laugh, Layla tore off another chunk of the sandwich and fed it to Solstice, then threw the stick again.

In the few days the dog had been with Layla, they had relaxed into an easy companionship of finishing the set-up Layla's print shop area interspersed with frequent play breaks.

And Layla had come up with a name for the dog: Solstice.

During one of their play breaks, Beth arrived. "You have a dog!"

A hitch developed in Layla's breathing as she stared at Beth's belly. Where her pregnancy would soon start to show. "She adopted me when we were in Baker City. I named her Solstice."

"As in summer solstice?"

"As in a turning point. She didn't have a home and I haven't had a dog in awhile. Thought it was a good deal for both of us."

Copyright Genie Gabriel
www.GenieGabriel.com
Posted by Genene Valleau, writing as Genie Gabriel at 12:45 AM No comments: