Enter for a Chance to Win a FREE ebook: Christmas Pawsibilities!

TAPESTRIES IN TIME IS NOW AVAILABLE FOR PRE-ORDER
Just 99 cents for a limited time!
at Amazon, Barnes and Noble, Apple, Google Play, Kobo

To celebrate the release of the anthology, TAPESTRIES IN TIME (which features my novella, Street Dog Dreams)  I'm giving away copies of the ebook, Christmas Pawsibilities, to five commenters. The Royal Canines are introduced in this book when their space ship crash lands on Earth.

The follow-up story, Street Dog Dreams, tracks the misadventures of their search for a new dogdom with humans who know dogs are more than cuddly fur babies who take over your bed.

For a chance to win a FREE digital copy of Christmas Pawsibilities, comment below. I'd love to hear about the pet who has claimed your heart. (Or just leave a comment with your email address to be contacted if you are a winner.)

The contest runs through midnight PDT on Sunday, August 4, 2019.
P.S. PLEASE BE SURE TO LEAVE YOUR EMAIL
IN YOUR COMMENT SO I CAN CONTACT IF YOU ARE A WINNER!

The newest release from
Rogue Phoenix Press
is ready for preorder.
$0.99
for a limited time
at Amazon, Barnes and Noble, Apple, Google Play, Kobo

Taylor's Destiny
Enjoying a day of sailing, Taylor Maxwell never expected after a suffering a concussion she would wake up in another century. A resilient independent woman in the twenty-first century, the blond beauty is ill prepared for life in the 1800s. Her first sight of the naval captain who rescues her makes her heart stop, giving her hope for her future.
Born to a life of ease, Reid Stewart defies the dictates of those born to aristocracy and chooses a life of adventure in the navy and as a spy for the crown. When he discovers a nearly naked woman on the bow of small sailing ship, his heart warms. His love for Taylor and his need to protect her from a man who pursues her might cost him his life as well as hers.

Sardinian Sunset
What starts as a crazy idea to buy a house for less than the price of a cappuccino, becomes the journey into Olivia Francesca Porcu Martin’s ancestry. The home she purchases was in her family for generations until her grandmother fled to America.
Olivia is fleeing but not a war-torn island. She is searching for roots and will find them in a small town in the hills of Sardinia.

Crossing paths with a student traveler named Destiny, opens doors Olivia felt had been closed forever. It doesn’t hurt that the licensed Contractor named Rafaele, who wins the bid to help her remodel her home, is good looking and modest.

Two determined, independent Sardinian souls make Destiny’s job difficult on the best of days. But as we all know, you can’t fight Destiny.
.
Street Dog Dreams
What if dogs were royalty and humans their loyal servants? Hop aboard our invisible flying machine as Aunt Maddie and Uncle Horace join an international search for a new dogdom. The Royal Canines are recruiting street dogs who want a better life with devoted humans who speak the language of dogs. As foretold in an enchanted tapestry, their dream will turn an abandoned village in Sardinia, Italy, into an automated town where dogs can open their own refrigerators, play in the park all day, and always have a soft bed to sleep on--after they take a shower, of course!

A Quieter Display of Freedom

Since I have dogs with sensitive ears, the loud booms of fireworks are not my celebration of choice for this birthday month of the nation where I live. In a quieter pursuit, I searched the Internet for quotes about freedom. What I found was a fascinating array of thoughts from historical figures, fashion designers, rock musicians and, of course, authors, as well as many others.
If you're curious, I invite you to do your own search for "freedom"–in quotations, definitions or your own words. And share what has special meaning for you on the Rogue Phoenix Press blog for a chance to win a FREE digital copy of one of my romantic suspense novels, CHASING THE LEGACY. (Or just leave a comment with your email address to be contacted if you are a winner.)
Enter for a Chance to Win a FREE ebook:
Chasing the Legacy
The contest runs through midnight PDT on Sunday, July 21. 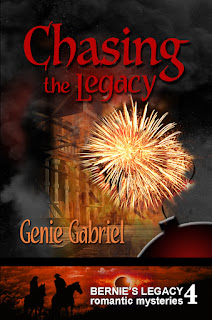 In this romantic adventure,
a newspaper reporter
with a penchant for flashy shoes
uncovers an explosive story
that could shatter lives
and defuse her budding love
with a soft-spoken bomb tech.
Posted by Genene Valleau, writing as Genie Gabriel at 12:28 AM No comments: