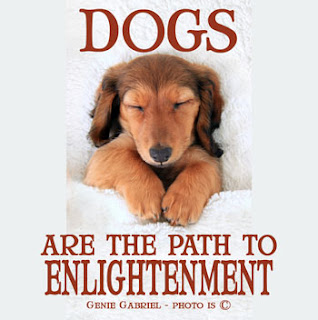 Posted by Genene Valleau, writing as Genie Gabriel at 9:58 PM No comments:

WHEN THE @&!# HITS THE FAN, GROW FLOWERS 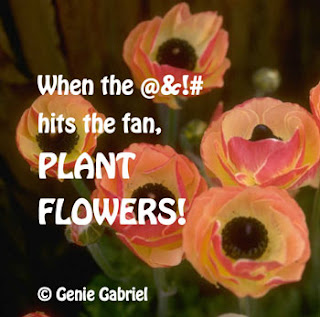 I had an ugly confrontation a couple days ago with some neighbors over their kids playing in the street and hitting my vehicle with their ball. The ugliest came from one particular family who, of course, have been at the center of these kinds of issues in all the years they have lived in these apartments.

I over-reacted--yep, partly as a result of letting these incidents build up and not dealing with and releasing them. Of course, this family embodies most of the poor-me, entitlement beliefs that are total hot buttons for me.

Do I need to mention 2016 is the Year of No Excuses for me? Things I haven't dealt with or say I want to change but have my own excuses for not doing are in my face!

Fortunately, during the incident the other day I soon realized it would be useless to try to talk to these parents. So I was picking up my toys to go home, as the saying goes.

Unfortunately, by that time the parent was wound up, totally off in her own skewed drama, and belligerent.

Fortunately, other parents and neighbors had gathered and were calm and reasonable.

While there may be other "unfortunately's" to this story, I'm choosing instead to focus on the "fortunately's."

I met the parent of a couple of the other boys, a former deputy in California who was great at diffusing situations. He took responsibility for his kids' actions and said it wouldn't happen again. Then we talked more deeply about parenting and beliefs and experiences.

The next day, I talked to the apartment managers about the incident. We also talked more deeply about how people have different parenting styles and beliefs, and ways to allow those without having our own rights trampled.

This incident also triggered another round of unplanned purging for me, with physical symptoms that act like food poisoning. In the position of worshipping the ceramic idol in my bathroom, I'm pretty much open to any suggestions from my spirit guides to make it stop!

I received the gift of how to match my vibration to that of my doggies, which is absolute love. That vibration is amazing! I look at things differently and I feel open to allowing miracles from the Universe.

Another discussion today with the apartment managers ended up mostly talking about challenges we are all going through. I've known these managers for a number of years, but feel this incident triggered a deeper conversation with them.

She also told me the belligerent neighbor had talked to her about another situation in their family but with no excuses. That's a huge step from this woman's poor-me tirade of just a couple days ago.

I thanked the manager for listening to both me and her tenant. Though that may seem like a simple thing, it really is a great gift to offer others.

The apartment manager also told me she and her husband felt moved to pray for me. Though our religious/spiritual beliefs are different, I was very appreciative they offered something to me of such deep value.

So what started out as an ugly incident has brought positive connections and deeper discussions. Opportunities to listen, to learn and to do things differently.

A situation that proved the value of the saying, "when the @&!# hits the fan, plant flowers!"
Posted by Genene Valleau, writing as Genie Gabriel at 3:22 PM No comments: 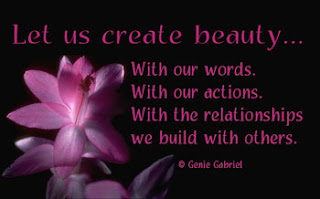 I'm still emerging from an unplanned purge--courtesy of something similar to food poisoning--that turned into a spiritual journey.

Know that I don't do anything "normal." So this spiritual journey took place lying on the cold tile of the bathroom floor, exhausted from little sleep and my last bout of worshipping the ceramic idol. I was begging my spirit guides to help me understand whatever thoughts, emotions, and past actions/events I needed to purge from body, mind and spirit to finish this lesson.

You might have guessed my spirit guides are not the stereotypical angelic beings with infinite patience for human antics. Oh, they have infinite patience, but they will also put a spiritual foot against my fanny and kick hard if I'm not seeing or doing what is best for me.

I won't digress into our a very down-to-earth spiritual relationship right now because I don't want to lose the gift of a thought they gave me today: What if part of our reason for being on this Earth plane is to create beauty?

Seems simple, doesn't it? However, throughout  this lifetime I've been programmed to work hard, make due, and not waste anything. Beauty wasn't really a consideration.

I've moved away from that a bit by combining beauty and function in everyday items like buying coordinating bed linens and towels rather than whatever color is on sale.

However, the idea that beauty isn't frivolous or wasteful, but is indeed a wonderful goal in itself really set me thinking today. I also realized beauty isn't just something we see, but the words we speak, the actions we take, and how we treat others.

This idea is still new to me, but I want to explore and experience it further, by creating something beautiful every day--just because.
Posted by Genene Valleau, writing as Genie Gabriel at 5:32 PM No comments: