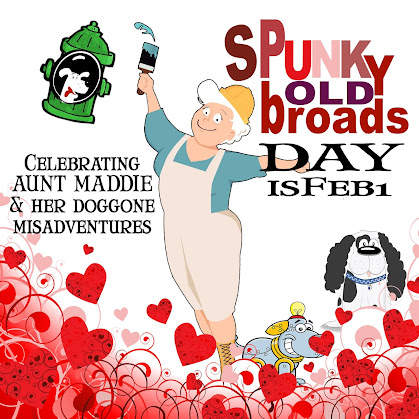 Spunky Old Broads Day was originated by Dr. Gayle Carson. Among her many accomplishments, she is author of "How to Be an S.O.B--A Spunky Old Broad Who Kicks Butt."

Holiday Insights says, an S.O.B. "... should be ... successful, independent, self-reliant, smart, intelligent, outgoing and out-spoken, resourceful, bold, brave, and anything but shy."

When I read this description, I immediately thought of Aunt Maddie and her Doggone Misadventures series. Check out the following excerpts from books in this series and see if you don't agree.

Madelaine shook her head. Wouldn’t it figure she would get kidnapped by two bozos who didn’t know what they were doing. “Untie me.”

from ST. BATZY & THE TIME MACHINE

...the hijacker’s shrill whine added fresh pain to Maddie’s headache. She cuffed him alongside the head and wrenched the gun out of his hand. “You are a rude little man and I’m tired of your behavior.”

from NO MORE POODLE SKIRTS

Maddie glared at him as he struggled to a sit. “Your friends struck again. Painted all over the mural. Now you are going to show me where your friends hang out. Or I will tell your mother not only do you not party all night, but you’re helping a priest with his good work.”

from CHRISTMAS PAWSIBILITIES: An SOB of the canine variety

Though obviously exhausted from giving birth, the Queen was determined to continue her duties as ruler. “I would ask that no one announce these births.”

“But, Your Majesty, there is always a planet-wide celebration with the birth of royal canines.” The alien named Buddy knelt on one knee beside the Canine Queen.

“We no longer have a home planet, and we are in danger here. Our entire way of life depends on keeping these babies safe. We must hide them–away from all that is familiar if necessary.”

“Perhaps hiding them in plain sight, Your Majesty,” Maddie said.

“How is that possible?” The Queen looked at Maddie.

“Here on Earth, canines are generally not treated with the respect of royalty. They may serve as beloved companions to humans, but most humans aren’t even able to communicate with their canines.”

The Queen frowned. “How barbaric.”

“I agree,” Maddie said. “However, we can use that to our advantage. You and your babies are welcome to stay in our castle. You will be treated as royalty by our family, but if any strangers

come around, they will see you simply as our animal companions. I apologize for any disrespect in this situation, but this ignorance of most humans pretty much guarantees the safety of you and your

“Your majesty, this is most disrespectful–“ one of the aliens started to protest, but the Queen cut him off.

“Madelaine is very wise. We accept your kind offer and I would be most grateful to have somewhere to rest with my babies.”

from STREET DOG DREAMS--more than one spunky old woman!

Maddie sipped her coffee, wondering if she should tell these women the rest of their plans. She glanced at Ilaria, a question in her eyes. If Ilaria trusted these women, Maddie would also.

Ilaria nodded slightly. “Tell my friends about the secret missions.”

“We are working on clearing the streets of randagi,” Maddie said.

“All stray dogs off the streets?”

“Yes.” Maddie sipped her coffee again and watched the others absorb this news.

Finally one of the women spoke. “That’s thousands of dogs. Where would you find room for all of them?”

“And food? And veterinary care?”

“All part of our mission,” Maddie said. “If you want to be involved, there may be some risks. The pay-off will be an almost free house and food for a year’s commitment, as well as the satisfaction of saving the street dogs.”

You can read excerpts from all my books at my web site:

Posted by Genene Valleau, writing as Genie Gabriel at 12:30 AM