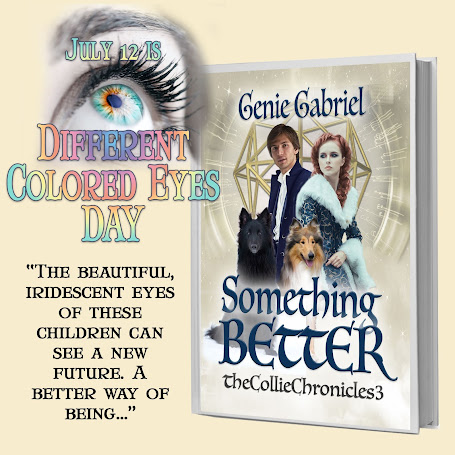 Also available in print
“Did you notice anything unusual about the children?” Freyja asked of Maeve as they cleaned up paints and straightened books after the children had moved on to other activities.
Maeve raised an eyebrow as she looked at her new friend and colleague. “I’ve not been around children much, so may not be the best person to answer. But now I’m curious why you asked that question?”
“Emerson and I watched the arrivals and departures on the Penumbral Dimension closely. Most of the arrivals were babies or children about age six. The babies usually came with guardians and many times left again during the same eclipse. When the older children arrived, they were generally alone, and I don’t recall any of them leaving again. I wondered if there was something about these children we were missing. Something a relative stranger would be able to spot.”
Maeve’s brow crinkled for a moment as she connected with the wisdom of her shamanic ancestors. “The beautiful, iridescent eyes of these children can see a new future. A better way of being. If they are in an environment that does not welcome this vision, their behaviors may seem without reason to those who cannot see a different way.”
Freyja nodded thoughtfully. “Yet in the shadows of the Penumbral Dimension that most see as hopeless, none of those behaviors showed up, such as the seizures some of the children mentioned having. The children eagerly attended the school Emerson and I set up to keep them from being bored. They can survive in nature by foraging for edible wild plants. They know how to build a shelter and find fresh water as well as start a fire and protect themselves with make-shift weapons. More than learning how to survive most circumstances, these children grew into young adults practicing how to turn challenges into something better.”
Once again nodding, Freyja grew excited as she recalled what the children had done. “We built greenhouses to have a more stable food supply. Drilled deep into the earth to tap geothermal energy as a power source to heat the greenhouses as well as provide lighting for the darkened streets. We recycled the water used for washing clothes to water the plants. Nothing was wasted. Scraps of everything were recycled and repurposed. Fortunately, some of us still had access to the technology on Earth Five and even improved what was available in that dimension, such as the thorium vehicles we used to escape when everything collapsed.”
“So the school in the Penumbral Dimension was perfect in preparing these children–who are now young adults–to build a better world here on Celtic Zero,” Maeve said.
“Exactly,” Freyja answered. “All came together perfectly.”
Maeve and Freyja looked at each other. “Humbling, isn’t it?”
“So where were the children in the intervening years between when they disappeared as babies and came back to the Penumbral Dimension when they were six years old?”
Copyright Genie Gabriel
You can read excerpts from all my books
on my web site:
www.GenieGabriel.com
Posted by Genene Valleau, writing as Genie Gabriel at 12:30 AM